"Somewhere, something incredibile is waiting to be know" - Carl Sagan

“Science is a way of thinking much more than it is a body of knowledge.” - Carl Sagan

“We're made of star stuff. We are a way for the cosmos to know itself.” - Carl Sagan

“[My study of the universe] leaves little doubt that life has occurred on other planets. I doubt if the human race is the most intelligent form of life.” - Harold Urey

“I have worked with some of the greatest minds in astrophysics and it is now clear that they were the dunces of astrobiology.” - Steven Magee

“Man must rise above the Earth—to the top of the atmosphere and beyond—for only thus will he fully understand the world in which he lives.” - Socrates

“Equipped with his five senses, man explores the universe around him and calls the adventure Science.” - Edwin Hubble

“To confine our attention to terrestrial matters would be to limit the human spirit.” - Stephen Hawking

“It is we who live in the extreme environment.” - Thomas Gold

“Extinction is the rule. Survival is the exception.” - Carl Sagan

“There should be no boundaries to human endeavor.” - Stephen Hawking

“The origin of life is one of the great outstanding mysteries of science.” - Paul Davies

“Space is for everybody. It’s not just for a few people in science or math, or for a select group of astronauts. That’s our new frontier out there, and it’s everybody’s business to know about space.” - Christa McAuliffe

“I know the sky is not the limit because there are footprints on the Moon - and I made some of them!” - Buzz Aldrin

“We are limited only by our imagination and our will to act.” - Ron Garan

Did you know that life might have started at deep-sea hydrothermal vents, a spectacular type of extreme environment that constellates tectonic plate boundaries at the bottom of the ocean? And that the technology beyond cancer research, genetic therapy and even COVID-19 testing is allowed by a thermostable enzyme isolated from Thermus aquaticus, an extremophile isolated from a hot spring in Yellowstone National Park? Or that the current rovers roaming on Mars have been developed and tested in Mars-analog environments in the Atacama desert and Iceland?

Extreme Environments are some of the most fascinating environments of our planet. They include a number of diverse ecosystems, ranging from polar environments, to the deep-sea, from methane seeps to hot springs, from desert environments to nuclear waste contaminated sites. The impact of extreme environments on our society runs much deeper that you might know. 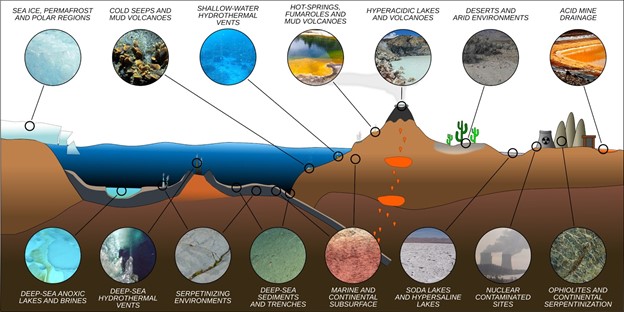 Figure reproduced from Merino et al. (2019, Frontiers in Earth Science) representing the diversity of extreme environments on our planets.

The current definition of extreme environments is rather anthropocentric, and includes “any environment where key physico-chemical parameters deviate from the (human-centric) norm”. Parameters like temperature, pH, salinity, pressure as well as the concentration of certain chemical are commonly used to describe the diversity of “extremes” present within each ecosystem. Extreme environments are inhabit by a diverse suite of animal and plant life, perfectly adapted to the harsh conditions, in addition to a vast diversity of microscopic, unicellular prokaryotic species. Extremophiles, that is the organisms adapted to live in extreme conditions, and especially microbial extremophiles, have long challenged our understanding of the distribution and limit of life. Currently, thanks to the research carried out in extreme environments, we know that the upper temperature limit for life is a scorching 122°C while the lower limit is -18°C. We know that life can be found virtually anywhere there is liquid water on this planet, often challenging our own understanding of its distribution and evolution. 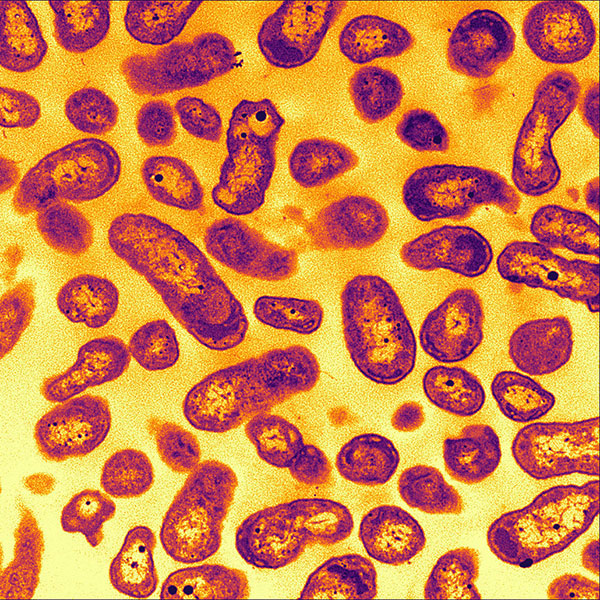 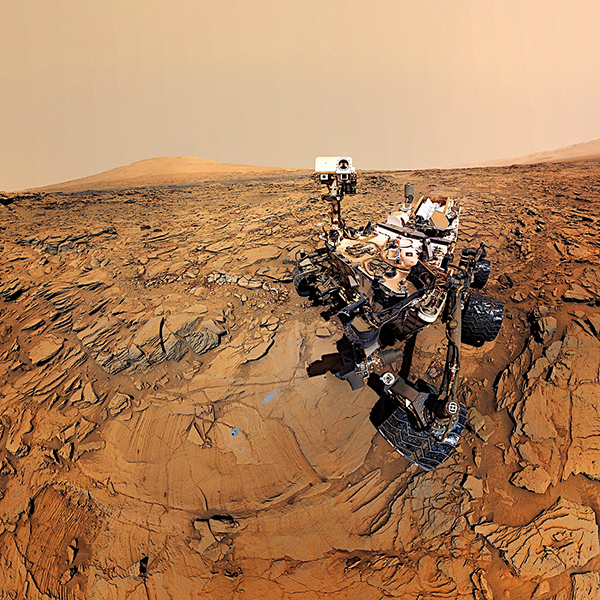 A selfie of the Mars rover Curiosity inside Gale crater, courtesy of NASA/JPL. Curiosity is exploring the surface of Mars to better understand its history, current processes and assess the possibility that life exists or ever existed on the red planet.

Extreme environments thus represent some of the vastest biomes of our planet, and might have represented the most common type of ecosystems during Earth evolution. Research in the biology of extreme environments has several different focuses. First, it helps us understand how our planet works, how biogeochemical cycles operate and what is the contribution of these vast ecosystems to global functioning. Second, given the evolutionary history of our planet, research in extreme environments might get us closer to understanding the origin of life, and answer one of the most compelling questions of human existence: where do we come from? Third, given the breathtaking diversity of organisms found in extreme environments, research regarding the biologic, genetic and biochemical diversity in these ecosystems has the potential to hold the next breakthrough in biotechnology or biomedicine. Fourth, extreme environments represent great analogs for the study of the limits of life in astrobiological, and provide key locations to develop technologies and strategies that will serve humanity as we explore and colonize extraterrestrial planets and moons.

Did you know for example that the enzyme used in every modern genomic and medical research, including COVID-19 molecular test, the Taq polymerase, was isolated from an extremophilic bacterium called Thermus aquaticus?

The new graduate program in the Biology of Extreme Environments is the first of its kind both in Italy and in Europe, and aims to prepare the next generation of biologists that will work to unravel the role of extreme environments in controlling planet habitability, influence biogeochemical cycling, provide new biotechnological solutions and contribute to space exploration. To reach these goals we are training the explorers of tomorrow, integrating multiple disciplines, focusing on hard to ask big questions and providing hand-on training and research experience.

Join us in a journey to understand the emergence and evolution of life and its limit. Come explore some of the most remote locations of our planet, and to understand how they influence global biogeochemistry and planetary functioning. Contribute to understand where we come from and where we are heading. Come to work with us on the future!